When you think of plant safety it is common to think about the things you can see or do. This can be rules and regulations on how to navigate throughout the plant as well as wearing the appropriate safety attire such as hard hats, safety glasses, ear plugs, in addition to fire suits or Kevlar gloves to name a few. So, if the plant has all these things, isn’t it safe? Well, maybe, or maybe not? What about the things you can’t see such as static electricity? Have you considered the need for grounding and bonding?

The number of static electricity incidents reported in the U.S. exceeds more the 250 a year. The reports of these incidents are way more common that you would like to think. Certainly, when electrostatic charge build-up exists in a flammable or explosive environment a very hazardous situation has been created.

Typically these situations can be avoided by installing high quality low resistance grounding/ bonding cables containing clips and clamps. The clips are required to maintain high clamp pressure and the clamps will need to have a paint piercing point to be effective in garnering a solid metal on metal connection to reduce resistance and reduce static. The clips and clamps can be connected to a braided copper cable or better yet, a stainless steel wire rope which tends to hold up better in industrial applications. Make sure the connections to the cables are tight and always test the assembly for low resistance, the closer you get to 1 OHM the better.

Grounding / bonding cables don’t always guarantee static dissipation. Many times a grounding or bonding cable is attached to an object (tank or pump) which has been coated for protection. These types of coatings can impede the clip or clamp’s ability to make a solid metal to metal connection, which in turn, increases the resistance within the grounding structure. With increased resistance comes the possibility of electrostatic discharge failure. Rust build up on the clip or clamp can also create a coating which will disrupt a solid metal to metal connection. As a result, this too will create an unsafe environment. To avoid these situations, always test your grounding / bonding cable’s connections for resistance at the time of employment. If the resistance is low, great! Move on. If the resistance is high, make the necessary adjustments to insure a solid connection and low resistance. Don’t take a chance, make sure a solid connection is evident before giving it your seal of approval.

In conclusion, plant safety goes well beyond the need for appropriate attire and traffic flow logistics throughout the plant. Electrostatic discharge, the invisible threat, will need to be addressed as well. High quality, low resistance affordable grounding / bonding equipment is readily available to provide the required protection. Appropriately placed grounding / bonding cables and assemblies along with consistent resistance testing will provide a safe work environment for everyone.

To read more about grounding and bonding, check out our whitepaper

An Introduction to Static Electricity in Industry

Static electricity is all around us in everyday life and generally refers to an imbalance between positive and negative charges in objects. Most people have experienced it in some form or another whether it be with their laundry being particularly “clingy,” making a balloon stick to a wall after rubbing it on your clothes, or when walking around wearing socks on a carpet and getting a small shock when touching another object or person.

The Science of Static

Static electricity is a result of an imbalance between positive and negative charges when two objects or materials come into contact. The surface electrons try to balance each other while the two surfaces are together. When two materials or surfaces are touching, one surface gives up electrons and becomes more positively charged while the other object surface collects extra electrons and becomes more negatively charged. When the two materials are separated, an imbalance occurs when the surfaces are left with either a surplus or shortage of electrons, and the surfaces become electrically charged. These charges build up when they don’t have a direct path to the ground, and can eventually build up enough to cause a spark to a nearby grounded or less charged object in an attempt to balance the charge.

When you take off a wool sweater and the hair on your head and arms stand up, the hair acts this way because your body got an extra charge from the friction of the sweater being removed and your hairs are moving away from each other because they all have the same charge.

With your laundry, your clothes in the dryer are rubbing up against each other (particularly when you have different types of fabrics in there, like cotton and polyester), those charges will cause the fabrics to cling to your body.

Lightning is another example of static discharge. You see it because electricity is being produced between two clouds or between a cloud and the earth as the static electricity is discharged.

Static electricity is very important in many industries as can used to our benefit, or it is a problematic issue that needs to be mitigated, reduced, or removed.

For example, some helpful uses in industry are in pollution control – like air purifiers. The air purifier applied a static charge to dirt particles in the air and then passes the air over an electrostatic plate of the opposite electrical charge. The dirt then clings to the plates and can be easily removed. Factories use this same principle on a larger scale for their smokestacks to keep pollution out of the environment.

Another use for static electricity is for spray painting car parts. This requires a specialized paint gun that applies an electrostaitc charge to the paint. The parts for painting need to be properly grounded using metal clips, clamps and wires. The charge causes the paint to be attracted to the car parts resulting in an even coat, less mess, and less wasted paint.

In other industries, static can cause a lot of problems. Sparks caused by static can cause fires and explosions. While hazards for fires may be obvious with flammable materials, this can also happen in industries where there is dust, like flour mills. Static electricity is also an issue where electronics are used and manufactured.

Static electricity in industry is caused by machinery where this is friction and contact and separation, as well as in instances where there are rapid heat changes. People can build up their own charges simply by the friction created when they walk, so when they move within proximity to a machine, they can receive a shock. Static sparks can be very serious in industry, not only can they cause an ignition or explosion but they can also cause a burn or stop someone’s heart.

Some other sources of static electricity production in industry can be liquid flowing through a pipe, hose or opening, blending or mixing, spraying or coating, filling drums, cans, pails, or tanks and conveyer belts.

Electrical charges can also build up in flammable liquids when they flow through pipe systems or when they splash due to being moved in their storage containers.

Humidity is a significant factor as moisture in the air helps to remove some charge. Dry environments are much more prone to static buildup. Different materials and production speeds also play a role in how much and how fast static is created.

Static electricity in industry is controlled by several methods. We will focus on the most common of these methods, Bonding and Grounding. 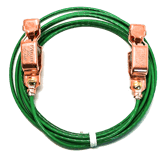 Bonding is when two or more conductive objects are connected with a conductor like a wire, which helps to equalize the charge between them. Bonding doesn’t eliminate static electricity but it does ensure that a spark will not happen between the objects. An example of a cable used for bonding is to the left. In this example, two copper clips are on either end of a wire and clip directly to the items being bonded.

Grounding is when objects that can gain a charge are connected directly into the earth using metal like grounding rods, copper, and steel. Grounding drains the static charges away as they are produced. Grounding and bonding connections are made with connectors using metal clips, clamps and wires. 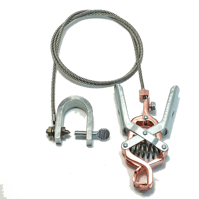 A grounding/bonding assembly is a clamp or clip with a grounding cable or wire. One end attaches to the item being grounded or bonded. The other end attaches to the ground, whether it be a ground rod or a grounding "bus" mounted on a wall. Ground connectivity of all devices, cables and connections must be checked at installation and regularly afterwards for safety and to ensure the connection is maintained. Many grounding clips and clamps have a paint-piercing ability to ensure a metal-on-metal connection. Check out Mueller Electric's catalog for more examples of grounding and bonding equipment.

Other Websites For More Reading:

Uses of Electrostatics on BBC.co.uk