How Well Do Marine Clips Hold Up In Saltwater?

When selecting a clip for an application, there are often environmental considerations that may affect the clips over time. One of the toughest environments is a marine environment where there is a lot of moisture and salt which corrodes many types of metal.

I performed an experiment with our 46 series clips to see how well the marine clip actually withstands a salty marine environment.

We already know that Stainless Steel and Copper both hold up in a marine environment pretty well, but how well? One of the primary uses for clips is for safety and electrical/grounding applications, so it's important that the clip holds up well and works the way it's supposed to. Clips that cannot hold up in a marine environment would need to be replaced often, which also adds a cost consideration.

Stainless Steel and Copper are both excellent choices for a marine environment and the main difference when selecting a clip that is right for you would be if you need to solder to the clip. Stainless steel is nearly impossible to solder a wire to. Copper is easily solderable. In most cases the 46M (M for Marine) would be the clip of choice because of that soldering capability.

Now onto the experiment!

I took 1 of each of the following clips and I put them in a plastic ziploc bag partially filled with with salt water to simulate a wet salty environment with both water and air. Salt water corrodes metal five times faster than fresh water does and the salty, humid ocean air causes metal to corrode 10 times faster than air with a normal amount of humidity.

I documented the changes in the clips over time with exposure to that environment.

An introduction to the different clips taking part in this experiement:

BU-46A :  Copper Plated Steel with a Steel Rivet and Spring

BU-46C : Solid Copper with a Steel Rivet and Spring

BU-46M :  Copper with a Stainless Steel Rivet and Spring

Here's an image of the clips before they go into their salty environment - tops and sides. 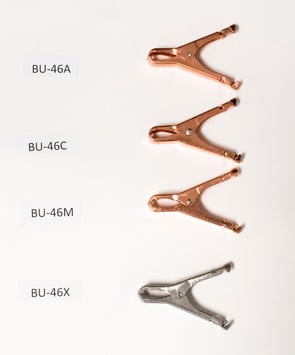 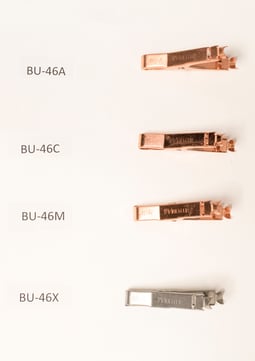 Day 0 (January 4th 2018): the clips were placed in their respective ziploc baggies with salt water.

Day 1: There are some changes already!

The 46C bag shows green discoloration in the water from the salt reacting with the steel rivet, but the clip itself looks ok. The water in the 46A clip bag has taken on a slightly yellow tinge. No change in the 46M or 46X. 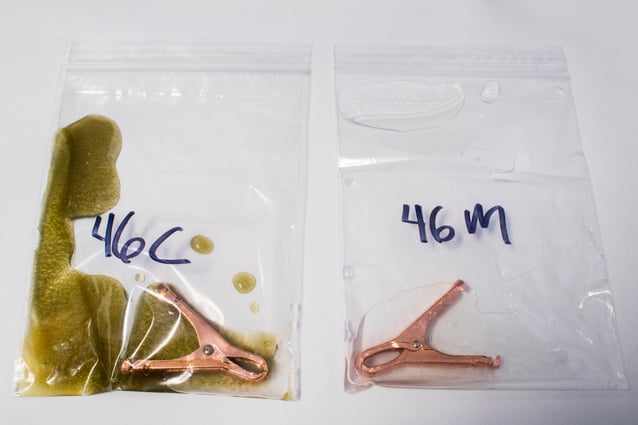 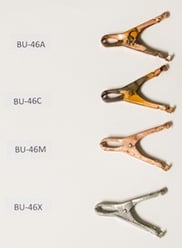 I took the clips out of their bags for a photograph. The two on top are the ones with the steel rivets that are corroding due to the salt, which is causing the discoloration that is coating the copper.

Notice that 46 C appears to have less corrosion on it - that's because I photographed it lying on the other side. Since I have them lying on their sides in these baggies, the side with more air exposure seems to look worse.

I also photographed them on their edge - the water line is more apparent. 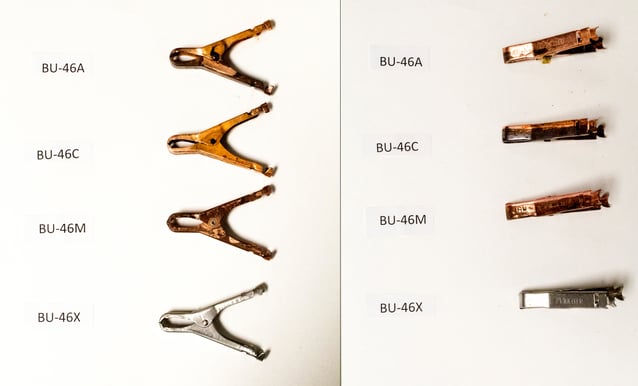 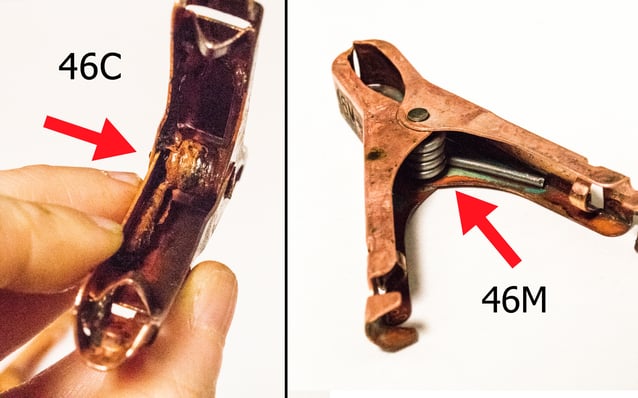 There's quite a bit going on in these bags. 46A and 46C have a lot of corrosion in the water. 46M's water has a green tinge from the copper, and 46X - the stainless steel one has clear water. 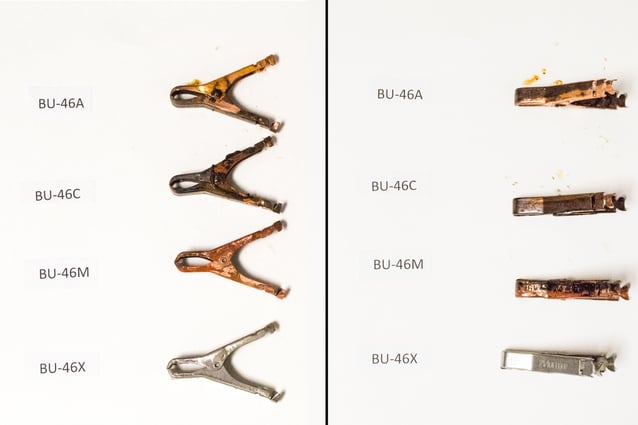 Here's the clip lineup. The 46C has a ton of crusty corrosion on the side - this was the side that was in the water. It seems like the crust is coming from the rivet. Below is a closeup of the clip so you can see this corrosion. It's starting on the 46A but much worse on the 46C.  Compare with the stainless steel rivet on the 46M. 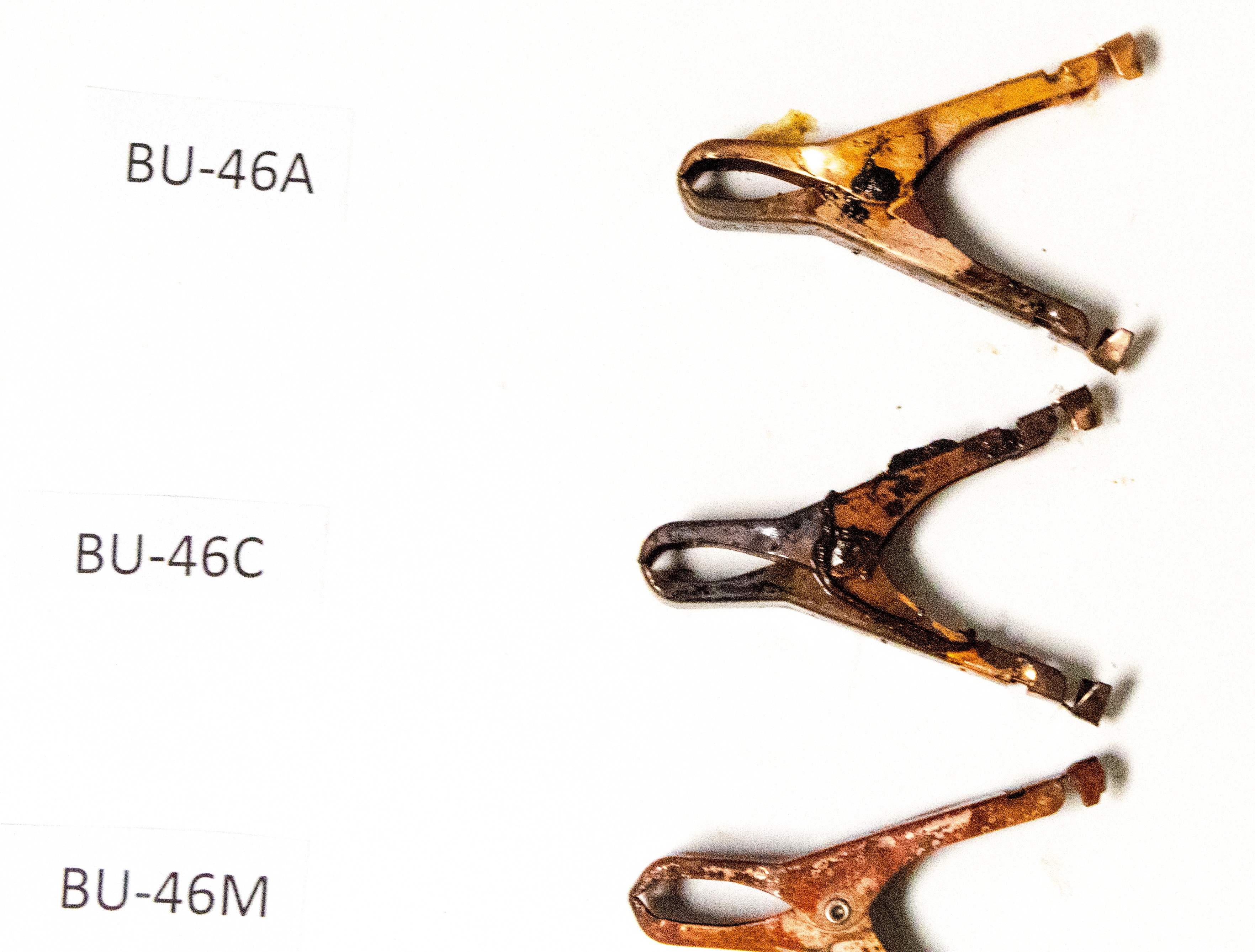 Let's take a look at the bags. The reflection on the plastic makes it a little hard to read what's what. The top photo is the 46A and 46M clips. You can see the rust and corrosion in the water of the 46A. The 46M has a greenish tinge from the copper. 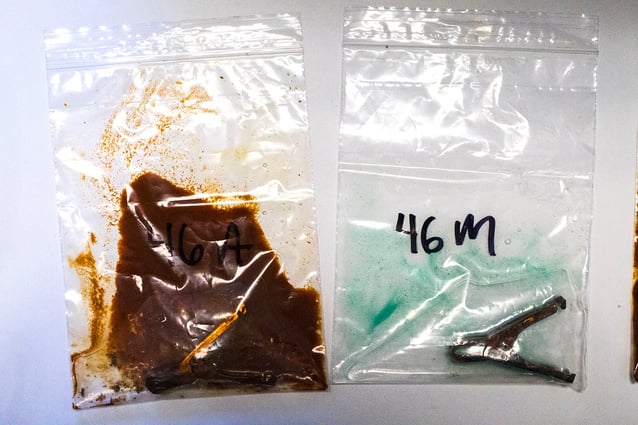 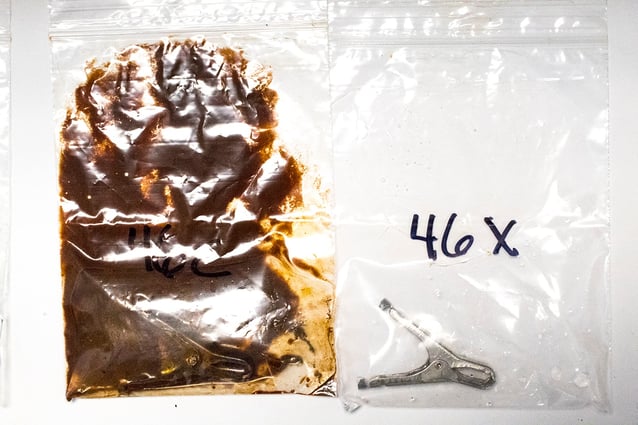 Next, I took them out of the bags to photograph. The 46A has this black line going across the rivet - that's some crusty corrosion. 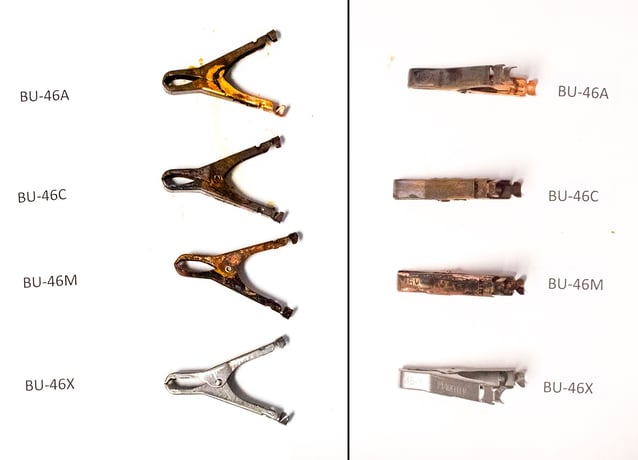 Here's some up-close photos to look at the corrosion.

First is the 46A - it appears that black crusty corrosion is coming right out of the rivet. It breaks off really easily. I have tried very hard to keep as much of it in place as possible but the slightest touch makes it crumble off. The spring inside is totally fused with rust.

Next is the 46C. There's so much rust and corrosion on the inside. This didn't take long to form at all. There's similar crustyness near the rivet that chipped off as I was removing it from the bag. 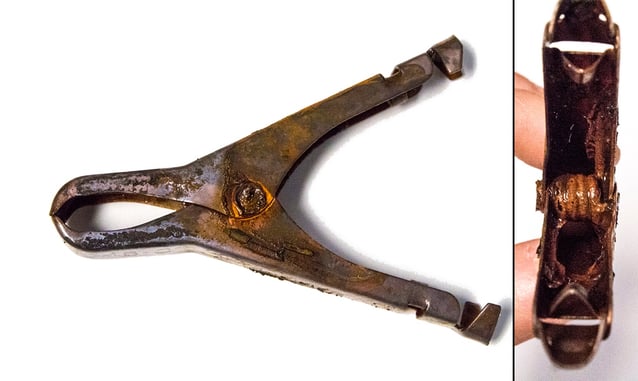 Next is the 46M. This is the copper with stainless steel rivet and spring. The outside actually looks rather pretty. It is starting to get a patina but it isn't crusty and gross. The spring and rivet are in excellent shape. 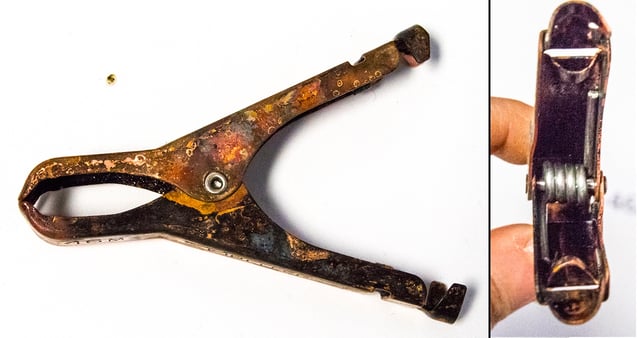 I was a bad scientist and forgot to photograph the 46X up close - mostly because there's no changes at all. It looks the same as when I first put it in its bag. It is entirely stainless steel and isn't corroded.

Its getting harder and harder to keep the board clean that I'm photographing these on. When I remove them from the bags to photograph I have some paper towels that I use to gently dry them off, but even when they are decently dry, they will still leave a mess when they touch the white board. 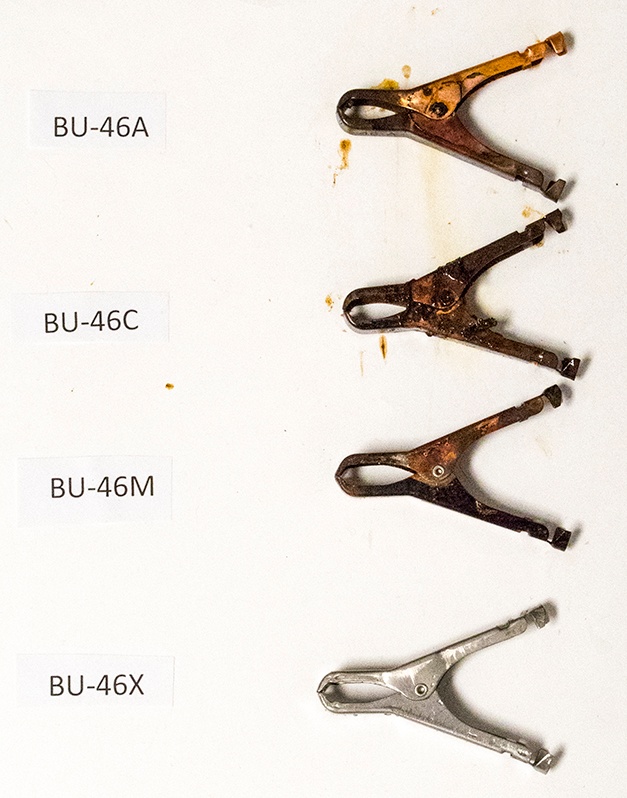 The 46C fell apart. When I went to take it out of the bag, the rivet was gone. 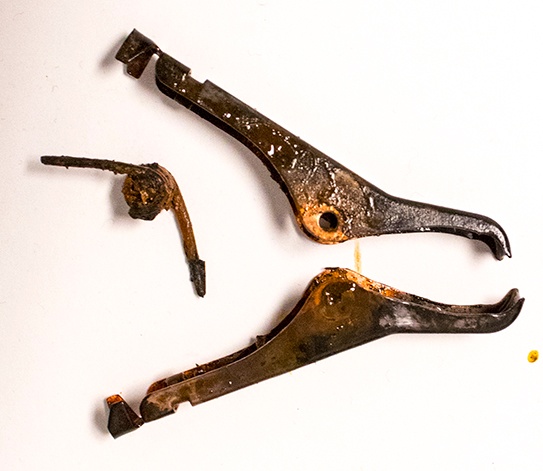 Of course now we need to take a look at the other springs more closely. On the left is the 46X, the middle is the 46M and the right is the 46A. It's hard to get a good photo with detail but the two stainless steel springs on the left are in great shape. The steel spring on the 46A on the right is rusted and fused together. 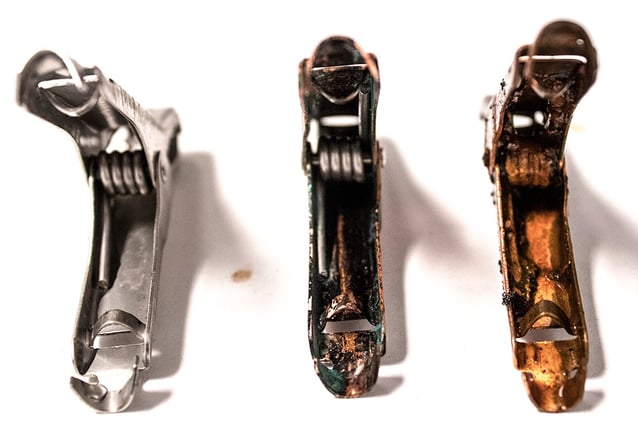 Here are our lovely bags!

There is no visible change with the bags - until I picked them up. I did notice that there was quite a lot of salt crusted on the outside tops of the 46A and 46C bags.

The 46A rivet disappeared completely as it did in the 46C. One difference I noticed between the 46A and 46C bags is that the 46A bag feels more crusty/sludgy. It was really gross. There was black rusty crusty sludge all over the clip when I took it out. Total tetanus soup. I really did not enjoy taking it out of the bag, and toweling it off. The 46C bag is like that too but much more liquidy. 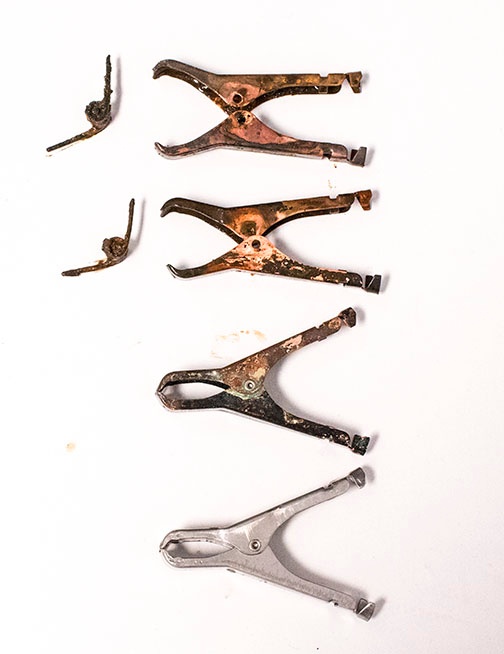 The remaining clips that both have stainless steel rivets and springs are in great shape. 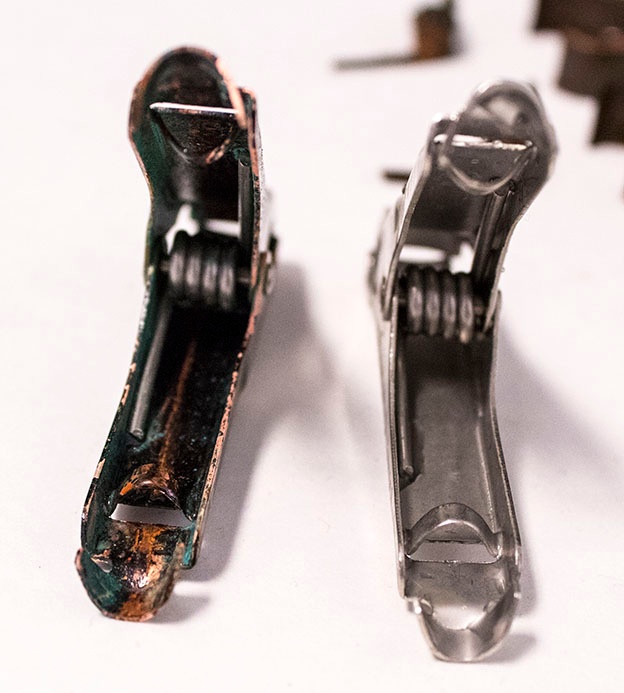 And the two winners are the 46M Marine clip and the 46X stainless clip! Both have stainless steel rivets and springs so they won't corrode in salt water. While the 46X looks the same as it did when we started the experiment, the 46M has started to develop a patina on the copper.

This green color is copper chloride, and is a layer of corrosion that forms in a saltwater environment, like on the Statue of Liberty. The other copper clips likely have this copper chloride layer as well, but there is so much other rust in the water it doesn't show up.

Why choose the 46M clip over the stainless? As stated at the beginning of the post, the all-stainless clip cannot be soldered to, so if you need to solder a wire to the clip, you need something that can be soldered to. So while the 46M looks worse than the stainless, it still provides an added utility that the other does not. When selecting a clip, consider if soldering is necessary. If not then the 46X would be your best choice. If you do need to solder, the 46M is the best choice.

For a more general overview of different kinds of clips, check out our Guide To Clips.